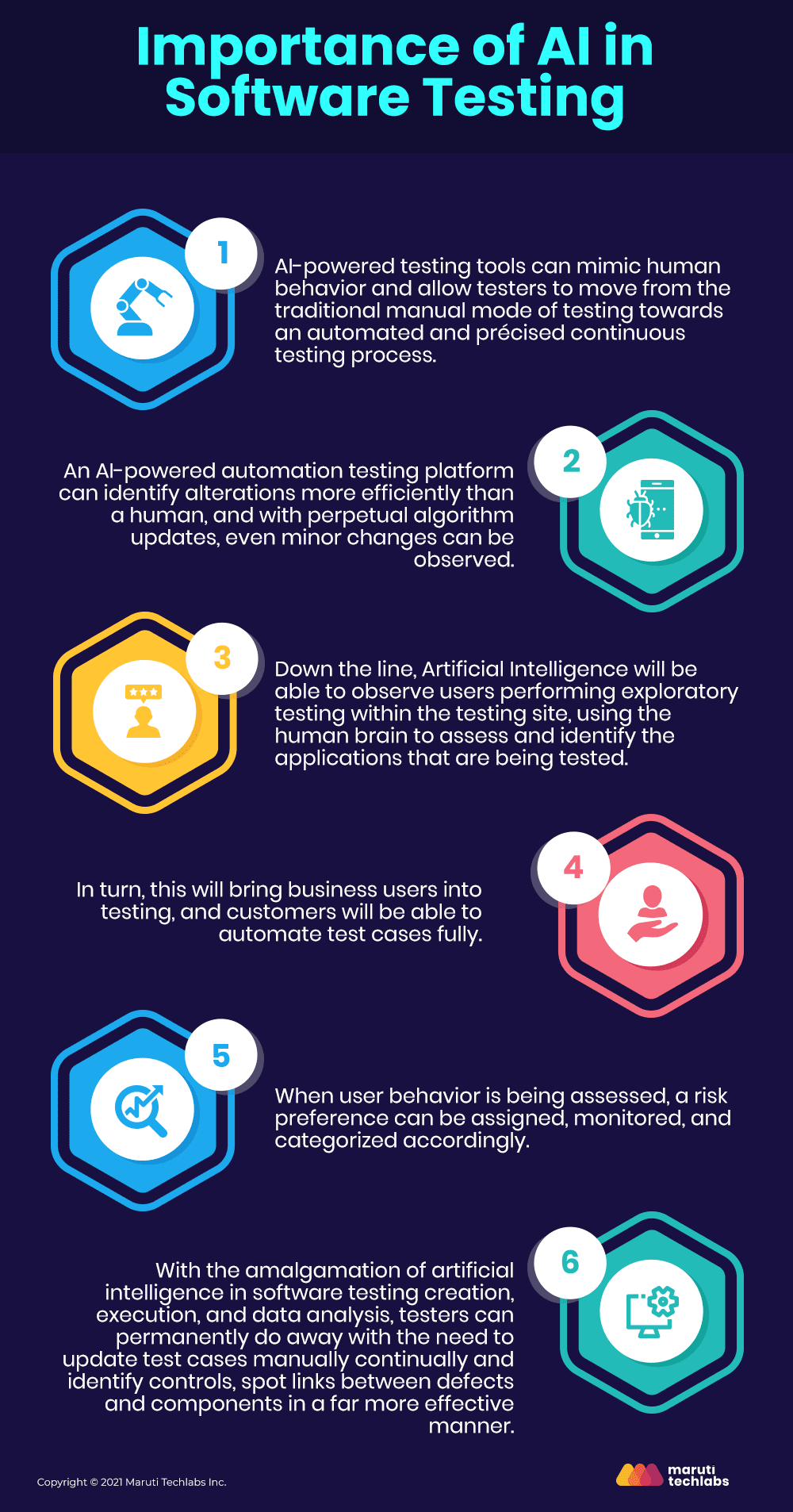 How Does AI Help in Automation Testing?

Most advancements in software testing have come through the addition of automation testing rather than manual testing. Due to the competitive market and growing technological complexity, the Software Development Life Cycle (SDLC) has been reinforced to get the goods to market at breakneck rates. The need for smart testing and speedy development is increasing every day.

Modern methodologies like Continuous Testing, Agile, and DevOps keep the software development process moving, but using artificial intelligence is essential if they want to test automation as a service.

A PwC analysis estimates that by 2030, AI might contribute up to $15.7 trillion to global economic growth. Unquestionably, AI and automation are revolutionizing business practices and enabling organizations to reconsider their strategies.

AI in testing speeds up the SDLC by giving testers suitable technology, including automation testing tools like TestingWhiz.

What is Artificial Intelligence?

Artificial intelligence is a system capable of learning on its own. On top of that, it can assist human intellect and activity. It accomplishes this by perceiving the environment, addressing human problems, and doing human activities.

Google Maps, for instance, uses AI to detect traffic patterns and recommend the best routes for you to take. Machine learning, a form of artificial intelligence, also powers Netflix’s recommendation algorithm, which suggests shows based on your likes.

You may also like :  15 Ways a Custom Canopy Can Transform Your Business

These AI systems operate by feeding data into complex algorithms that can recognize patterns in the data and improve over time. Furthermore, when they are exposed to more data, these algorithms become better at understanding their surroundings and seeing trends. These systems can also be trained to perform simple and complex tasks using techniques for pattern matching.

Artificial Intelligence (AI) is going to change testing in a lot of ways. Here are some test automation cases which already advantage AI and how to successfully use them in your testing.

In this area, AI is beginning to shine. In AI-based UI testing, test automation tools examine the DOM and supporting code to identify object properties. They also use image recognition approaches to navigate the application and visually inspect UI elements to create UI tests.

Additionally, AI test systems employ exploratory testing to find errors or consistency issues in the application’s user interface and to provide screenshots for later verification by a QA engineer. Similar to this, the visual factors of the System Under Tests (SUT), like size, layout, and color, can be identified.

Since testing scenarios usually focus on a particular section, providing a substantial amount of inflexibility, simple changes to the program frequently result in tests failing. Testing using AI/ML can adapt to changes in real time because it can recognize and learn about relationships between diverse segments. Since the test scripts can automatically adapt to the changes, the testing is more reliable and consistent.

AI uses machine learning and pattern recognition capabilities to look for software’s visual defects to ensure the program’s visual validity. A QA method used to make sure that the application’s user interface appears to the user as intended is AI-powered visual testing. The different visual elements are prevented from unnecessarily overlapping one another because of this. This is particularly beneficial because the human eye will likely miss the subtle visual errors that AI can spot more quickly and accurately.

Even without AI, automating API testing is problematic because it necessitates a grasp of the API and the development of tests for various scenarios to ensure depth and breadth of coverage.

Current API test automation tools, such as Tricentis and SoapUI, note down API activity and traffic for analysis and test preparation. However, before updating the API test suite, testers must review the intricacies of REST calls and arguments to edit and update tests.

You may also like :  Healthy and Affordable Meal Ideas

For novice testers or those with zero programming experience, API testing can be beneficial to get them to begin.

If the code changes aren’t too sophisticated, AI-based solutions can analyze the changes and fix several existing tests. Due to modifications made to UI elements, field names, and other components, the test suite is no longer required to fail.

Some AI systems monitor running tests and try out changed variants for failing tests using UI elements based on the best match. They can also verify test coverage and, if necessary, close any holes.